Aluminium window, curtain walling and doors from TECHNAL were specified and installed for the transformation of an outdated office development. 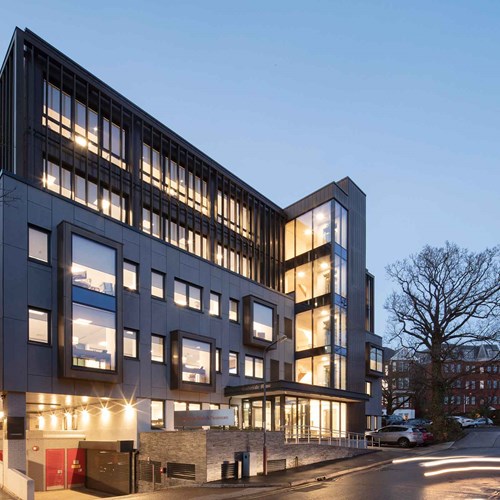 Aluminium window, curtain walling and doors from TECHNAL were specified and installed for the transformation of an outdated office development.

Renovation in the centre of Royal Tunbridge Wells

Situated in the centre of Royal Tunbridge Wells, Heathervale House is a commercial property which has been used as an office space for decades. Originally clad in brick, slate and hung tile, the building had started to show signs of disrepair, looking tired and dilapidated. To bring it back to life, the building owner developed plans to undertake a wide scale refurbishment and extension of the property. Following a feasibility study, the building was handed over to design-led architectural practice, MortonScarr.

Previously, Heathervale House had featured small, brown-framed windows which limited the amount of sunlight that reached inside.

"Morton Scarr contacted us at the early stages of the design process to provide the build team with technical advice on how it could best achieve its vision whilst improving the building's external envelope performance. One of the project team's key ambitions was to incorporate more glazing products into the build, to create a much brighter, lighter space."

TECHNAL also assisted on a large rear extension, a new glazed lift to the front and two additional fully glazed storeys on top of the existing roof. Flooding the new office spaces with daylight, the large glazed expanses are shaded by two-storey bronze louvres. As a result, the newly fitted out office brings in much more natural light than before.

"At an early stage, we understood the importance of incorporating high-quality, architectural solutions into this build and that's why we chose TECHNAL, and got them involved almost immediately. We found the company to be extremely helpful and always available to answer our technical questions. The team also stuck with the principle package discussed in our initial meeting. Whilst some changes needed to be made along the way, we were always informed and kept in the loop, enabling us to achieve our overall design intent."

TECHNAL supplied a range of products including many of the glazed solutions identified at an early stage of design development. This included Dualframe 75 Si reversible windows, which provide thermal performance without the need for costly sealed unit specification.

The fabricator on this project was Watford-based A Plus Windows.

"A number of curtain walling situations using the Elegance 52 Standard and Elegance 52 SX systems were detailed. And to complete the glazing scheme, TECHNAL Stormframe STII High Traffic Aluminium Doors were installed, which are widely recognised as an exceptional product in terms of performance and fabrication. As well as delivering its product solutions, all of the relevant CAD detailing was provided by TECHNAL to ensure accurate planning, manufacture and installation."

Jon Palethorpe, Joint Managing Director at A Plus Windows

The £5 million renovation project is now complete and a local business has already moved into the extensively refurbished office space.

Contact our team of Project Consultants to work on your next refurbishment project.