Figures released by architectural aluminium glazing specialist, Technal, indicate that demand for its façade systems in Ireland has grown dramatically.  Technal has also announced ambitious plans for further expansion, which includes increasing its network of fabricators.

In the past three years, Technal’s turnover in Ireland has more than doubled and enquiries have increased by 80 per cent.  Average project size has also doubled.

Technal’s growth follows the launch of its new MX curtain walling system – an industry first for Ireland – and a number of senior staff appointments to offer technical support to architects, fabricators and contractors locally, further strengthening the team.  Its operations relocated to new, larger premises in Dublin earlier this year.

Lead times are among the shortest in the market, and a full training workshop programme is provided to fabricators and installers to ensure the highest standards of construction.

Commenting on the expansion plans, Des Bellew, General Manager for Technal in Ireland, said “In order to meet the ongoing demand for our façade systems, we are looking for new fabricators and installers who share our vision for market leading customer service and unrivalled quality.  Plans are in place to continue the growth of our business in Ireland and increase current volumes by 50 per cent over the next three years.”

“We have broadened the range of our products in response to the changing requirements of both specifiers and fabricators, and our move to new offices has given us space for future expansion, while maintaining the highest levels of customer service.”

The volume of curtain walling sales continues to grow as a reflection of the move towards more transparent buildings.  Architects increasingly want a greater proportion of glass to maximise natural light and specifications have become more technically demanding to meet the challenge of sustainable construction and minimising the impact of new buildings on the environment.

Technal, part of Hydro Building Systems, is one of Europe’s market leaders in the design, manufacture and distribution of high performance aluminium glazing solutions.  Its portfolio of systems for commercial and residential applications includes grid, structural and beaded curtain walling for low to high rise applications; windows, doors and ground floor framing. 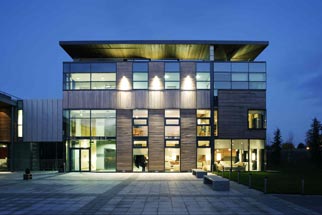