Situated on the banks of the River Suir, The Source Arts Centre and Library in Thurles, County Tipperary, has won an Architectural Association of Ireland (AAI) Award and the award for Best Public and Cultural Building at the Irish Architecture Awards.  Both awards aim to encourage the highest standards of design and recognise the projects that have made a significant contribution to Irish architecture.

Designed by McCullough Mulvin Architects, the €10m scheme is a landmark riverside complex, which has provided the local community with a flexible, contemporary and multi-functional building.  It successfully integrates an exhibition space, a 250-seat auditorium and stage, and a library and media zone.

A dynamic folding roof envelopes the building, zinc-clad planes define the different functions, and sheer panes of glass created from Technal’s aluminium visible grid curtain walling, face the river.  The high level of glazing allows natural light to flood into the centre, creating a sense of airiness and a bright, pleasant space for staff and visitors.

The curtain walling, which was used on all four elevations, features glass to glass corners where it changes direction to follow the bend in the river.  It also projects outwards and returns in at angles of up to 15 degrees.

Technal’s system allowed the architects to create a ‘random rhythm’ for the façade and an irregular pattern, which almost has the appearance of stonework.  This was achieved by breaking the glass walls down into smaller sections, giving an unusual appearance and an alternative to conventional grid curtain walling.

The distinctive pattern in the curtain walling was formed by using full length transoms with horizontal mullions in between.  The glazed units span each floor level and were staggered to create the abstract style and a strong identity for the main façade that overlooks the river.

The glazing was fabricated and installed by Kilkenny Aluminium and finished in a dramatic black polyester powder coating.  Technal’s high performance FXi65 casement windows in a top hung open-out configuration were inserted into the curtain walling to allow the temperature of the building to be controlled by the occupants.  The units were glazed in Pilkington clear solar control glass.

Technal’s curtain walling combines aesthetic variety with the reassurance of enhanced thermal performance and superior weatherproofing.  It can be used to create low to high-rise façades, visible grid curtain walling, faceted, structural, beaded and sloped glazing.  MX Trame can be used to highlight the vertical or horizontal profiles across the building envelope. 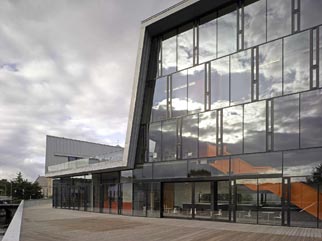 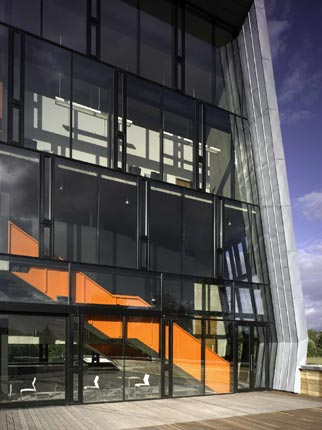 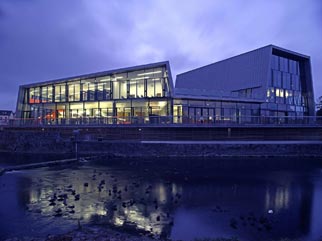