Designed by architects RPP, the ECIT building overlooks the dry dock where the Titanic was fitted out, and forms part of the largest mixed-use waterfront development in Europe.

In acknowledgement of the history of the site, which was once the world’s largest shipyard, the glazed façade has the appearance of the bow of a ship leaning into the wind. This was achieved with Technal’s Trame Verticale system, which spans three storeys and was structurally bonded to allow an incline of 12 degrees.

The curtain walling carries large 1.5m by 3m double glazed units and has glass to glass joints at the corners to maximise the spectacular views of the River Lagan and towards Belfast Lough from the café, conference room and the board room. The vertical lines of the façade were accentuated with the distinctive Trame aerofoil cap.

“We wanted the building to make a statement, give visitors to the Institute a very positive first impression and create a stimulating environment”, said Project Architect, Paul Moore of RPP. “We felt the building should have a degree of symbolism to reflect the history of the site, and the curtain walling allowed us to achieve this with its references to the prow of a ship. The incline was an aesthetic decision to add drama to the elevation facing the waterfront, which we think has worked very well.”

Technal’s visible grid curtain walling was used to integrate with copper coloured cladding panels, which is complemented by green tinted glass. The glazing fabricators were WFM and both the visible grid and Trame Verticale systems were finished in a contemporary dark grey, low maintenance powder coating.

The Titanic Quarter is a 180-acre site, which will rejuvenate the dockyard area of Belfast, creating a new and vibrant city centre community on the banks of the Lagan. 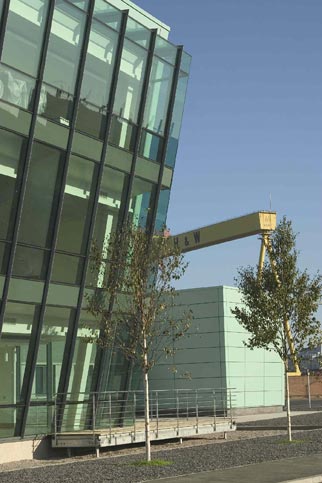