Architectural aluminium glazing systems from Technal have been used for the first national museum to be built in the North East.  Locomotion is an £11.5m development that combines a series of historic buildings with a new purpose-designed facility that houses 60 historically important vehicles from the national railway collection.

Designed by Austin Smith Lord, the museum is a major regeneration project located in Shildon, one of the world’s oldest railway towns.  Since opening, the facility has exceeded all expectations, with visitor numbers three times above those predicted.  It has also been shortlisted for the Gulbenkian Prize for Museum of the Year and the Conservation Awards.

Technal’s MC Trame Horizontale curtain walling was specified as continuous bands of ribbon glazing to provide high level lighting to the long sides of the building.  The horizontal emphasis of the system met the architectural aesthetics of the design and contrasts effectively with the gabion wall construction – galvanised steel baskets filled with local stone.

The Trame curtain walling system also features prominently to the main and rear elevations, which are curved at the eaves.  The design maximises the amount of natural light entering the building to reduce energy consumption, in keeping with the strong sustainability theme of the project.

Other environmental measures include photovoltaic panels on the roof to generate additional electricity, and a windmill to power a pump for harvesting rainwater for the steam locomotives.

The curtain walling was fabricated and installed by Saint-Gobain Solaglas and glazed in clear laminated and toughened low E glass.  Technal’s CD high traffic commercial doors were supplied for the main entrance.

Facilities in the new building include the exhibition space, conservation workshops, an education suite, café, offices, shop, and a purpose-built railway platform for the shuttle train to the car park and other buildings on the site. 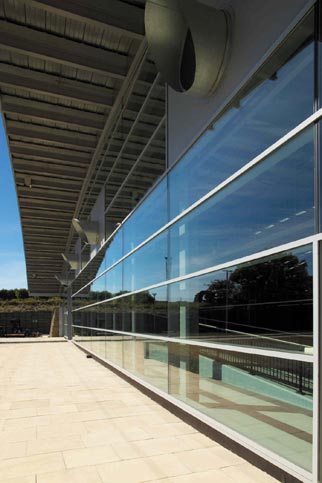 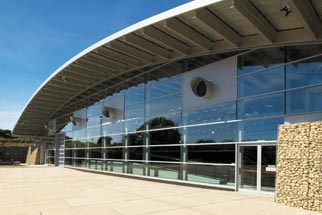