Curtain walling from architectural aluminium system specialists, Technal, has helped to create a highly visible new gateway and transport hub for the Berkshire town of Slough.

Designed by Bblur Architecture and built by McLaren Construction, Slough Bus Station is a bold new transport interchange that links the railway station and bus passengers to the town centre, replacing its infamous Brunel-designed bus station. It provides safe, enjoyable and efficient facilities and a new route into the main shopping areas, joining the north and south of the town which had long been separated by the A4 trunk road.

The £7m scheme has an ambitious, sculptural design, which was the result of an architectural competition to create a building on a very restricted site that would be an important transport hub and an attention-grabbing entrance to the town centre.

The result is a striking, curvaceous and futuristic metallic design featuring a series of gentle undulating roof canopies and incorporating a 140m long covered pedestrian walkway that stretches into the town.  The only straight lines in the project are in the glazed façade which was created using Technal’s Géode-MX62 curtain walling.

The system, which was fabricated and installed by Glassolutions Installation, spans the full height of the first floor on the north and south elevations of the accommodation building.  It features a bespoke head and cill, and split mullions to interface with the aluminium cladding system that curves in two directions.

Finished in dark grey, the Géode-MX62 curtain wall, which was developed to accommodate larger dimensions and maximise natural light, allowed clear spans of 6m to be created.

Commenting on the specification requirements for the project, Matthew Bedward, Partner at Bblur Architecture, said “We specified Technal’s MX62 system to provide us with a glazing solution that would be clean, simple and elegant, as well as efficient and economical.”

“It also needed to accommodate large spans but with slim mullions and no visible transoms. And to realise our vision for the building, we wanted a system that wouldn’t detract from the sculptural qualities of the overall design.  We are pleased with the finished effect.”

The Géode-MX62 system enables architects and contractors to specify even larger sizes of glass to help reduce the reliance on artificial lighting. A maximum weight of 600kg per transom can be specified compared to up to 400kg for the standard visible grid system.  It is available in three mullion/transom sizes – 80mm, 140mm and 200mm for further design flexibility and will accommodate 8mm to 44mm glazing as a flat façade.

The building is clad in specially-designed mill finished brushed and coated aluminium shingle tiles that form a softly textured metallic surface and change character in varying light conditions.  This finish also echoes the roof tiles of the nearby listed Great Western Railway Station.

The 660sqm two-storey station accommodation building provides a café, safe waiting area, retail outlet and ticket office, with an office for inspectors and canteen for bus crews located on the first floor.  Behind this facility are the two ‘sinuous tails’ that form the covered walkway under which are 10 angled bus bays and associated bus stops.

The bus station also has strong sustainability credentials. It has a BREEAM ‘very good’ rating, is heated and cooled using an energy-efficient heat exchange system with pipes buried underground, and the cladding tiles are made from aluminium that is 97 per cent recyclable.  The canopy cladding sits on layers of recycled plastic.

The building, which is set to become a much loved landmark for the town and has already been shortlisted for a number of awards, is the first phase of Slough Borough Council’s Heart of Slough initiative for wider regeneration, providing its young, multi-cultural population with a high quality urban environment. 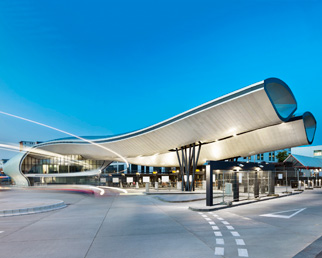 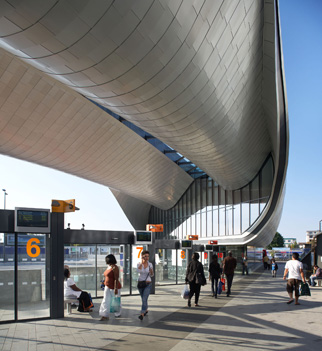