Curtain walling from Technal’s MC Trame suite has been specified by architects Perkins Ogden for a dramatic new entertainment facility at the University of Southampton.

Originally designed by Sir Basil Spence, the students’ union building is a steel, glass and concrete structure comprising four blocks. These blocks have now been refurbished and a former debating chamber has been transformed into a multi-purpose entertainment space for around 1,500 students.

Technal’s curtain walling, which was fabricated and installed by St Gobain Solaglas, was used for a glazed link that forms the main entrance to the entertainment building, looking out onto a courtyard. This link is the heart of the scheme. It contains an enlarged circulation space and bars at ground and first floor levels to serve the entertainment facility.

Commenting on the curtain walling, Tim Coel, Project Architect at Perkins Ogden, said, “We selected the MC Trame system for its verticality. There are no visible mullions horizontally, so the glazing is articulated as vertical strips. The system also supports cedar brise soleil above ground floor level to further emphasise the vertical lines and to provide shade from the south west sun.”

He added, “The curtain walling helped us to create a space which is bright and light during the day, and which glows attractively at night to reflect the building’s role as an exciting entertainment venue.”

For this scheme, the MC Trame Verticale system was finished in satin black and double glazed using clear glass. It was also used for an area on the south elevation, with Technal’s CD commercial hinged doors at ground floor level.

The MC Trame curtain walling suite is a highly innovative glazing system, which gives architects the flexibility to emphasise the horizontal or vertical lines in a façade with the use of shaped transom caps, whilst the corresponding profiles are softened. The result is a more interesting appearance for the building envelope. Options in the range include top hung or tilt/turn concealed vents. 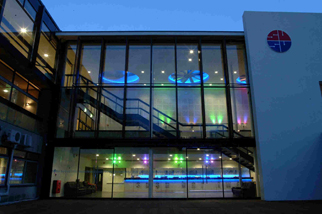