The awards recognise excellence in contemporary architecture and are part of the Civic Trust’s campaign for better buildings and places. The winning schemes, which were selected by the judges from 525 entries, will be used to demonstrate what can be achieved through good design.

Martin Bacon, Chief Executive of the Civic Trust said, “Three themes have emerged during the judging process: the importance of sustainability; the need to take more care when making buildings accessible; and the importance of creating buildings that work well in their context. Across the country, architects, their clients and planners are collaborating to produce buildings of a quality that far exceeds that which was being achieved 10 years ago.”

He added, “All of the Civic Trust Award winners hold lessons about how to achieve outstanding buildings and places.”

Designed by Bennetts Associates for Scotland’s first National Park, the Gateway and Orientation Centre is located in a spectacular setting on the shores of Loch Lomond. This rectangular pavilion has full height glazing to each elevation formed from Technal’s MC Trame curtain wall. The simplicity of this system echoes the scheme’s restrained design and has created a transparency, which integrates the building into the landscape and maximises the scenic views.

The new drama studios at Hampshire County Council’s Brune Park Community School have also won a Civic Trust Award. This circular building, which again features curtain walling from Technal’s MC suite, has a creative yet functional design, using copper roofing and yellow brick to complement the existing school. The scheme was described by the judges as “beautifully detailed and weathering well”.

Bournemouth’s new Central Library received a Civic Trust Award Commendation. Designed by architects BDP, this is a fully accessible facility, which is a vital element in the regeneration of the city. The glazed exterior was formed using large spans of Technal’s specially adapted MC curtain walling. According to the judges, this maximises daylight and helps to create an atmosphere of informality, inviting people into the building. As a measure of its success, the library has recently seen its visitor figures increase almost threefold.

The Sixth Avenue Apartments also received an Award Commendation. Designed by Cartwright Pickard Architects and built off-site by Yorkon, these affordable apartments are located on a brownfield site in York. Here, the use of steel-framed modular building enabled the project for Yorkshire Housing to be delivered in just 14 months. The contemporary design has low maintenance terracotta and timber cladding for visual appeal.

The Sixth Avenue scheme features Technal’s FXi46 casement windows and is the first UK application of their new GXi sliding balcony door, which was used to allow access from each apartment on to a generous timber-decked balcony or private garden. 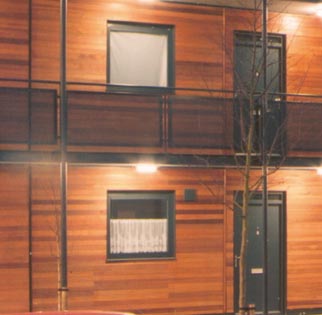