The first UK application of the new structurally glazed curtain walling system from architectural aluminium specialist, Technal, has been completed. The façade project for the University of Sunderland has transformed a former 1960s campus building into a bright and dramatic gateway to the university.

Architects FaulknerBrowns developed an innovative design for the fenestration which utilised a bold pattern of irregular bays to create a visually striking façade that could incorporate a mix of transparent, opaque and opening panels, and meet the demanding requirements of the Building Regulations.

Glazing from Technal was used to reproduce the geometric pattern of colours for the building’s new external envelope. The distinctive abstract style is characterised by vertical and horizontal lines, which form irregular rectangles glazed in a palette of bright colours. The result gives the building a strong identity and provides a focal point for the main university square.

Commenting on the glazing specification, Rebecca Williams, Project Architect at FaulknerBrowns, said, “Our aim was to create a new, colourful and inspiring entrance to the university. The use of structural glazing allowed us to form smooth projecting bays on the main elevation and an off-set arrangement of transoms and mullions with a flush finish. This gives the building its impact and a sense of dynamism, and a different appearance to conventional capped curtain walling.”

She added, “We have used Technal’s Trame system on a number of projects and felt the system’s horizontal emphasis would be the ideal solution to add interest to the areas of glazing between the strips of original brick cladding. We are very pleased with the finished building and the curtain walling is performing well.”

Technal’s Trame Horizontale façade system was used for horizontal emphasis to enclose the stairwells between areas of brick cladding, and capped visible grid curtain walling with FXi65 casement windows features on the west and east elevations.

As part of the extensive refurbishment, the building was stripped back to its concrete frame and steel windows and spandrel panels were replaced with high performance aluminium curtain walling.

MX SSG, which complements Technal’s visible grid and Trame curtain walling options, offers further aesthetic variety for the building envelope. The system has a number of patented features to meet the demands of modern architecture, and to facilitate installation.

Fabricated and installed by AC Yule, the systems for the Sunderland scheme were finished in grey and glazed in clear and coloured glass from Saint-Gobain’s Coolite range. 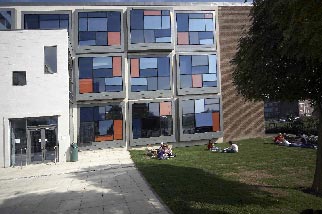 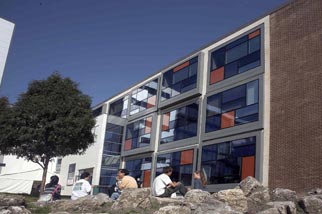