This statement building for the States of Guernsey was developed to cater for a forecast 30 per cent increase in air traffic over the next 25 years and to provide enhanced facilities for up to 1.25 million passengers. The new terminal has curved ends, powerful curved roofs and shaped overhanging eaves, which reflect the forms of the aeroplane and the building’s use. A dramatic curved 115m long timber-clad bulkhead internally has the appearance of the underside of an aircraft.

Technal’s MC curtain walling system was used with silver aerofoil caps to highlight the horizontal lines and visually elongate the building. The vertical profiles were finished in black, which are less prominent, adding to the horizontal emphasis. The curtain walling was facetted to the north and south elevations, to create sweeping curves that follow the aesthetic of an aircraft.

Commenting on the specification, James Harrison, Project Architect at Kensington Taylor said, “The facetted curtain walling allowed us to use flowing curved façades in keeping with the aeronautical design theme but was a more cost-effective solution than curving aluminium sections and glass. We also liked the horizontal emphasis that the system has created, which is exactly what we wanted to achieve and with no compromise on quality or performance.”

Fabricated and installed by St Gobain Solaglas, the curtain walling carries green tinted low E bomb blast resistant glass. The MC system was also specially adapted so the loads from the brise soleil sun shading on the south elevation could be transferred from a secondary external steel frame, through the transoms of the curtain walling system to an internal steel grid primary support.Set back at first floor level, the MC system provides ‘clerestorey’ glazing to drop natural light into the middle of the building.

Facilities in the 6,900 sqm terminal include a restaurant, spacious toilets, comfortable departures hall, generous duty free shop, tourist information and an arrivals hall for incoming passengers. The design of the first floor is open plan, taking advantage of the views over waiting aircraft through the full height glazing.

Technal’s MC suite allows architects to explore a wide variety of shapes and forms for the building envelope, with the reassurance of a proven, high performance system. Options in the range include tilt/turn and top hung concealed windows, facetted and sloped roof glazing, and high-rise grid curtain walls. 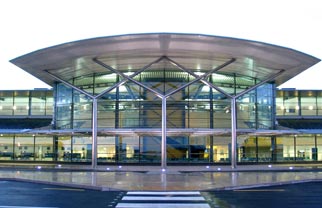 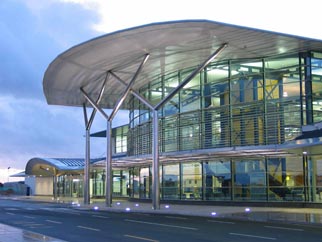