Designed by BDP, the new development replaced a library, which was said to be the second worst in England.  The new £10m PFI scheme forms a key part of the regeneration of the Triangle area of Bournemouth.  Since it opened, the library has seen a threefold increase in visitor numbers, with more than 3,500 people visiting during its first Saturday of operation.

The design was commended for its ‘openness and informality’.  The glazed north side provides a ‘window to the town, connecting the people in the building with their local surroundings’.  The scheme is in contrast to the enclosed nature of typical public libraries, by providing panoramic views and an interior that is full of light.

Technal’s MC curtain walling holds large spans of clear low E glazing, up to 3.9m by 1.7m in size, which allow daylight to pour into the centre of the building.  Finished in silver, the system is facetted around the main entrance, creating a curve which gains height and slopes downwards along the building.

Fabricated and installed by Saint Gobain Solaglas, the curtain wall also supports striking silver mesh screens for solar shading above the main entrance, and brise soleil sun shading above the ribbon glazing to the south elevation.  Special caps accentuate the vertical sections to add further interest to the external envelope.

The award was presented by Lord Falconer, who said, “This library is a triumph of excellent design, enthusiasm and urban renewal.  I believe the library will prove to be a beacon of design excellence – just like past winners of this prestigious award.  All those involved can take great pride in what they have achieved.”

The Prime Minister’s Award is sponsored by CABE (the Commission for Architecture and the Built Environment) and the Office of Government Commerce.  It is part of the British Construction Industry Awards. 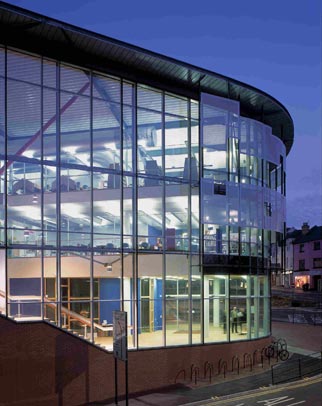